It was the summer of 1976; I had just finished my freshman year at Mercer University. I was serving as the Associate Pastor for a small Baptist church way out in the Georgia countryside. My only duty on most Wednesday evenings was to show up and so on this particular Wednesday night I showed up knowing that we were going to have a guest preacher because the Pastor had told me about him.

“He’s a local farmer,” the Pastor said, “who says he’s been called to preach. So I thought we ought to give him a try.” Our Pastor was big on being neighborly.

After we had sung some songs and prayed some prayers, the farmer/preacher stood up to speak. He read the 23rd Psalm: “The Lord is my shepherd, I shall not want,” he drawled, and went on to read the entire psalm. When he finished reading he prayed; he then lifted his head and looked out at the small congregation. I was sitting right in the middle of the sanctuary, poised to mentally critique his message because that’s what college students do. 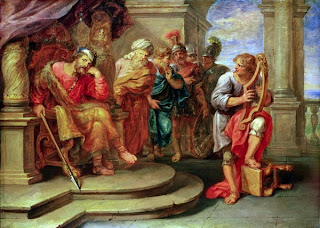 The first words out of his mouth were “Don’t you wish you could have been there when David blowed [sic] the harp for the king?”

And I was gone.

I’ve been told I have a good poker face (although I’ve never tried it out actually playing poker). If I do I think I may have started developing it that Wednesday night because somehow I kept a straight face as my imagination ran wild.

I saw King Saul; he looked like Buck Owens as he sat on a bale of hay, slapping his knee in time with the music. I saw David; he looked like Roy Clark playing “Wabash Cannonball” on his harmonica. Saul’s queen looked like Sunshine Cornsilk (you young folks will have to Google or Bing her) because of course she did. 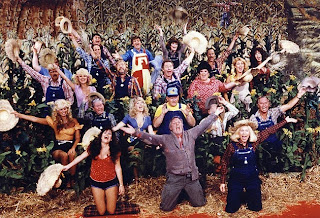 So yeah, in my head the entire scene unfolded on the set of Hee-Haw. It was great.

I don’t think I heard anything else the fellow said, which was a shame, because he probably had some things to teach me.

Many years later I realized that on that Wednesday evening listening to that farmer preach I gained my first insight into the way that one’s personal context influences one’s experience, interpretation, and understanding of anything that one encounters, including Scripture. I am who I am, I have had the experiences that I have had, and I have the life that I have lived. I filter everything that I see, experience, and read through the lens of my identity. The same was true with the farmer and his experiences were different than mine.

I assume that the speaker knew that there were stringed instruments called “harps,” but his experience and background caused him to picture a mouth harp when he read about David’s musical presentations to the troubled king.

There are lessons to be learned here about our reading of the Bible.

1. We should not presume that our immediate interpretation of a text is either accurate or inaccurate since our “gut level” response is a product of our personal default settings. We should therefore take the time to evaluate our response and to see if we need to take other perspectives into account before drawing conclusions.

2. We should not assume that other people’s interpretations are inaccurate just because theirs don’t agree with ours. Where they stand may well give them some insight that we need to consider.

3. We should take seriously our responsibility to read the Bible ethically and responsibly. This is true for all of us, but it is especially true for those of us who have the privilege of teaching the Bible. We need to teach in ways that honor and respect the experiences of other people. (On this point I find myself still being influenced by a book I read twenty years ago by Daniel Patte entitled Ethics of Biblical Interpretation).

4. We should approach the scriptures with an attitude of humility. We need to remember that we are very capable of being wrong.

5. We should come to the Bible carefully and prayerfully, always asking the Holy Spirit of God to lead us in our reading, understanding, and application.

6. We should listen to each other because it is in open, honest, and respectful discussion in the community of faith that we can best arrive at understanding.

You may perceive other lessons because of your particular experience. If so, I hope you’ll share them.

Posted by Michael Ruffin at 5:10 PM

Thanks for walking with me

Here at On the Jericho Road I hope to engage in conversations about the places where real faith meets real life. The controlling symbol for the work I will do on the blog comes from the parable of the Good Samaritan. The man who was beaten and left for dead beside the road to Jericho was a human being whose situation created a crisis not only for him but also for those folks who saw him there. What would they do? What should they do? We are confronted with similar situations all the time. How does our faith inform our thought processes, our decision making, and our action taking? I want us to think about confronting with real faith those real situations that come up in real life. I hope that our thinking leads us to appropriate action. Thanks for joining in the conversation.

The views expressed on this blog are mine and do not reflect those of the institutions with which I work. 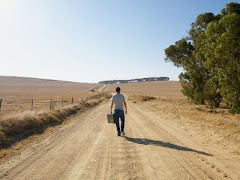 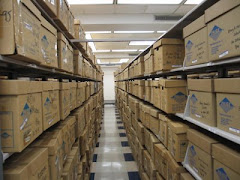